Invocation of the Pauline Privilege 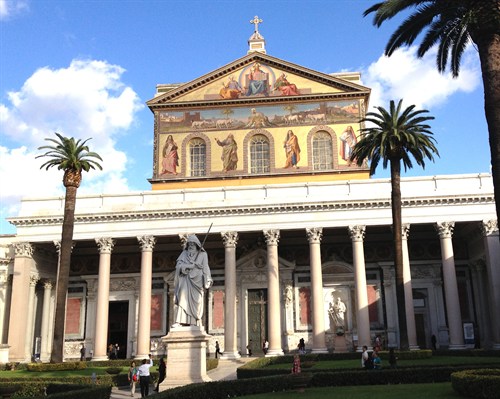 Basilica of St. Paul Outside the Walls, Rome

In his first letter to the Corinthians, St. Paul wrote on his authority as an apostle: "To the rest, I say (not the Lord): if any brother has a wife who is an unbeliever, and she is unwilling to go on living with him, he should not divorce her; and if any woman has a husband who is an unbeliever, and he is willing to go on living with her, she should not divorce her husband. For the unbelieving husband is made holy through his wife, and the unbelieving wife is made holy through the brother. ... If the unbeliever separates, however, let him separate. The brother or sister is not bound in such cases" (7:12-14a, 15a).

This passage establishes the principle that the Church has come to call the Pauline privilege.  In such a case, a natural marital bond between two unbaptized persons is dissolved by the fact that one of the parties receives baptism and enters a new marriage.

For the Pauline privilege to be invoked, it must be proven that both parties were unbaptized at the time of the marriage and that only one party has received baptism.  In this case, it must be clear that the other party does not wish to receive baptism and wishes to depart from marital life (or wishes to remain departed if the parties are already civilly divorced).  The party who has been baptized may not, however, be the cause of the separation after the baptism has taken place.

If you are the respondent for a Pauline privilege petition, click here for your form.

If you are a relative or friend of the petitioner, click here for your witness form.

If you are a relative or friend of the respondent, click here for your witness form.