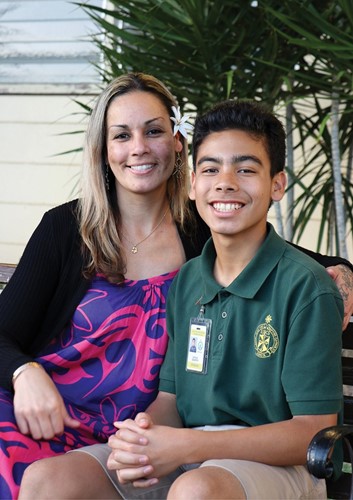 Enrollment in a Catholic school leads to baptism at Easter

When Dream Poe-Shippy transferred from a local public school to St. John the Baptist School in Kalihi at the start of the 2018-19 school year, he was ready for a change. The seventh grader had struggled some to fit in at his previous school.

“With public school you’re kind of on your own,” Dream said. “You feel like family here. I actually want to come to school. When I don’t go to school I’m like, ‘Oh, man I want to go to school!’”

His history teacher, Amanda Mosler, says Dream “definitely seems to thrive in this school and has made amazing friends.”

She said the seventh grade class in particular “adopted all of those new kids that came in [from other schools] and watch out for them. They take care of each other.”

Plus, Dream, who says he was “a little bit Catholic” before, has immersed himself in the Catholic faith. He will receive all three sacraments of initiation at St. John the Baptist Church at this year’s Easter vigil, April 20.  Read more...