The process for becoming a Catholic priest involves not so much a program in which one is "trained for a job", as it does a renewed relationship of discipleship to the Lord.  Becoming a Catholic priest entails a radical change in a man's way of life, through which a priestly identity is formed and revealed.  And like any process of growth, the formation of that priestly identity requires a sufficient amount of time.  Men who are accepted as potential candidates for the Catholic Priesthood for the Diocese of Honolulu can therefore expect to spend between seven to nine years as seminarians, living and studying at a seminary, prior to beginning their ministry as ordained priests of Jesus Christ.

In its deepest identity, the seminary is called to be, in its own way, a continuation in the Church of the apostolic community gathered about Jesus, listening to his word, proceeding toward the Easter experience, and awaiting the gift of the Spirit for the mission.  The seminary is, in itself, an original experience of the Church's life.  In it, the bishop is present through the ministry of the rector, and those with whom he shares his responsibility, for the sake of the pastoral and apostolic growth of the students.

The various members of the seminary community, gathered by the Spirit into a single brotherhood, cooperate, each according to his own gift, in the growth of all in faith and charity, so that they may suitably prepare for the priesthood; and so prolong in the Church, and in history, the saving presence of Jesus Christ, the Good Shepherd.

Because the Diocese of Honolulu does not operate its own seminary, Honolulu Seminarians are sent to the following places: 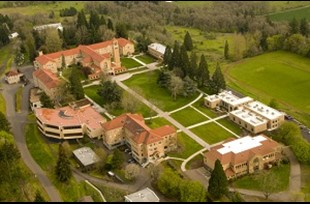 Our Honolulu seminarians spend their first four years at Mount Angel Seminary in Oregon, majoring in philosophy with courses foundational to their future studies in Sacred Theology.  The funding for college education is the responsibility of the college seminarian.  At the end of college seminary, a man can expect to receive a Bachelor of Arts degree in Philosophy.

In lieu of college seminary, our men who already have a bachelor degree would enter into the seminary program as Pre-Theologians at Saint Patrick Seminary in Menlo Park, California, undergoing an abbreviated two-year philosophy curriculum at cost to the Diocese of Honolulu; again attending courses designed to prepare them for future studies in Sacred Theology. 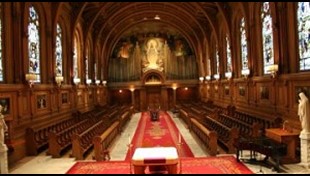 After college seminary or Pre-Theology, our men continue their studies at Saint Patrick Seminary in California, or Sacred Heart Seminary at Hales Corner, Wisconsin.  Seminarians receive a Master of Divinity degree after four years of studying Sacred Theology.

Ordinarily, after their second year of theology studies, seminarians take what is called a "pastoral year", during which they live and work at one of the sixty-six parishes in the Diocese of Honolulu in order to gain practical experience in parish ministry.  Following their pastoral year, seminarians return to the seminary for their final two years of academic study.

The Four Pillars of Priestly Formation:

The priestly vocation continues to be the call to live the unique and permanent priesthood of Christ.  At the same time, the life and ministry of the priest must also adapt to every era and circumstance of life.  In order to adequately respond to the deepest spiritual needs of contemporary society, seminarians are called upon to increase in maturity in each of the "Four Pillars of Priestly Formation".

In order that his ministry may be humanly as credible and acceptable as possible, the human personality of the seminarian is molded in such a way that it becomes a bridge, and not an obstacle, for others in their meeting with the Divine Person: Jesus Christ, the Redeemer of humanity.

Of special importance is the capacity to relate to others.  It is truly fundamental for those who will eventually be responsible for a community to be "men of communion."  This demands that our seminarians not be arrogant, or quarrelsome; but rather affable, hospitable, sincere in their words and heart, prudent and discreet, generous and ready to serve, capable of opening themselves to clear and brotherly relationships, and of encouraging the same in others; and quick to understand, forgive, and console.

Our future priests are therefore mentored in such a way as to cultivate in them these human qualities, not only for the sake of their personal growth and realization of self, but also in view to their future ministry.  These qualities are needed for them to be balanced men, strong and free, and capable of bearing the weight of pastoral responsibilities.  They also are educated to love the truth; to be loyal; to respect every person; to have a sense of justice; to be true to their word; to be genuinely compassionate; to be men of integrity; and especially, to be balanced in judgment and behavior.

Human formation, when it is carried out in the context of an anthropology which is open to the full truth regarding the whole person, leads to and finds its completion in spiritual formation.  The human person is fundamentally a religious creature, open to the transcendent and to the absolute; he has a heart that is restless until it rests in the Lord.  And so, the educational process of a spiritual life, seen as a relationship and communion with the God Who has revealed Himself, derives and develops from this fundamental and irrepressible religious need.

Candidates for the priesthood therefore participate in a comprehensive spiritual formation program, the goal of which is that students may learn to live in intimate and unceasing union with God the Father through his Son Jesus Christ, in the Holy Spirit.  Those who are to take on the likeness of Christ the High Priest by sacred ordination, are called upon to form the habit of drawing close to him as friends in every detail of their lives, and to live his paschal mystery in such a way that they will know how to initiate into it the people committed to their charge.

Our seminarians are taught to seek Christ in faithful meditation on the Word of God, and in active participation in the sacred mysteries of the Church, especially in the Eucharist, Reconciliation, and the Divine Office; to seek him in the bishop by whom they are sent, and in the people to whom they are sent, especially the poor, little children, the weak, sinners, and unbelievers.  With the confidence of sons, they are taught to love and reverence the most blessed Virgin Mary, who was given as Mother to the beloved disciple by Jesus Christ himself as he was dying on the Cross.

Following the counsel of Saint Peter, all Christians are called upon to "always be prepared to make a defense to anyone who calls [them] to account for the hope that is in [them]" (cf. 1 Peter 3:15).  However, as men ordained to proclaim the changeless Gospel of Jesus Christ, priests in particular bear great responsibility in doing so, and to present the Gospel as credible as possible to the legitimate demands of human reason, with consideration both to the fundamental and permanent question of the relationship between faith and reason, and to a number of requirements more closely related to the social and cultural situation of today, marked by various ideological prejudices and the violent rejection of the message of spiritual and religious values.

Therefore great care is given to the quality of intellectual formation that our men receive in preparing for priestly ministry, through which they receive a Bachelors of Arts Degree in Philosophy (for those without a bachelors degree) and a Maser of Divinity in Sacred Theology, prior to being ordained a priest of Jesus Christ in the Diocese of Honolulu.  The commitment to study, which takes up no small part of the time of our men preparing for the priesthood, is not in fact an external and secondary dimension of their human, Christian, spiritual, and vocational growth.  In reality, through study, especially the study of theology, they assent to the Word of God, grow in their spiritual lives, and prepares themselves to fulfill their pastoral ministry.

The whole formation of candidates for the priesthood aims at preparing them to enter into communion with the charity of Christ, the Good Shepherd.  And so, their formation in its different aspects has a fundamentally pastoral character.  The pastoral character of the priest makes him into a true shepherd of souls, after the example of our Lord Jesus Christ, who is the teacher, priest, and shepherd, par excellence.

All of a seminarian's human, spiritual, and intellectual formation is directed towards this specific pastoral end: that he, in his future ministry as priest, presents Christ to humanity, through the Eucharistic sacrifice and the sacraments; through his ministry of the revealed Word of God, made his own through meditation and prayer, expressed through his speech and way of life; and through his sincere gift of self for the salvation of souls, winning over many by becoming the servant of all (cf. 1 Cor. 9:19), like Christ our Lord, who "did not come to be served, but to serve, and to give his life as a ransom for many" (cf. Mk. 10:45; Jn. 13:12-17).