The Coat of Arms of Bishop Larry Silva

The Coat of Arms of Bishop Larry Silva 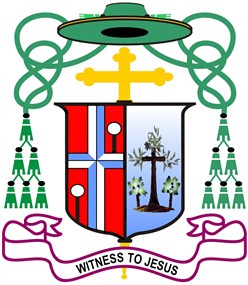 The episcopal hearldic achievement, commonly known as the bishop's coat of arms, is composed of a shield, the central and most important feature of any heraldic device, surrounded by traditional symbols of the bishop's office.

The coat of arms is topped with an old fashioned green broad rimmed bishop's hat, or galero, worn in processions until 1870, from which green tassels hang, six on each side indicating a bishop. Archbishops have 10 tassels on each side, cardinals 15. Behind the shield is a gold processional cross, one cross bar indicating a bishop, two an archbishop.

The arms of the diocese on the shield's left consists of a cross of episcopal authority representing the faith planted by the early missionaries in Hawai'i, quartered on a field of red, chosen because it was the dominant color on Hawai'i's coat of arms.

The order of colors from upper left to right is red, white and blue, the colors of the Hawaii flag.

The cross is quartered in white and blue, the colors of Our Blessed Mother, the diocese's patroness under the title Our Lady of Peace.

In the second and third quarters stands a white kapa ball on a black standard, an ancient Hawaiian ceremonial symbol indicating protection or a place of refuge, derived from the Seal of the Territory of Hawaii at the time the diocese was established in 1941.

The tree on the left is the oak, symbolizing Oakland, the diocese in which Bishop Silva's faith was nurtured and where he served as a priest for 30 years.

The center tree is the cross, the tree of life. It's leaves are olive leaves, symbolizing Our Lady of Peace, the patroness of the Diocese of Honolulu, under which whose protection Bishop Silva entrusts his episcopal ministry. The name "Honolulu" means "peaceful Harbor."

The trees growing out of an island on a blue background symbolizes the Pacific Ocean, which surrounds the Hawaiian Islands and touches the shores of California. "Pacific" also means "peaceful," thus also referring to the bishop as the servant of the Prince of Peace.

The inscription under the shield is Bishop Silva's episcopal motto "Witness to Jesus." The phrase is found in the Book of Revelation 19:10, chosen as a reminder that all programs, administrative functions and activities of the church are for one purpose only: to give witness to the risen and living Lord Jesus.

The design of the bishop's coat of arms was executed by Father Quang Dong and Thanh Dong of the Diocese of Oakland.