Edict: Beatification and Canonization of the Servant of God Joseph Dutton, Layman 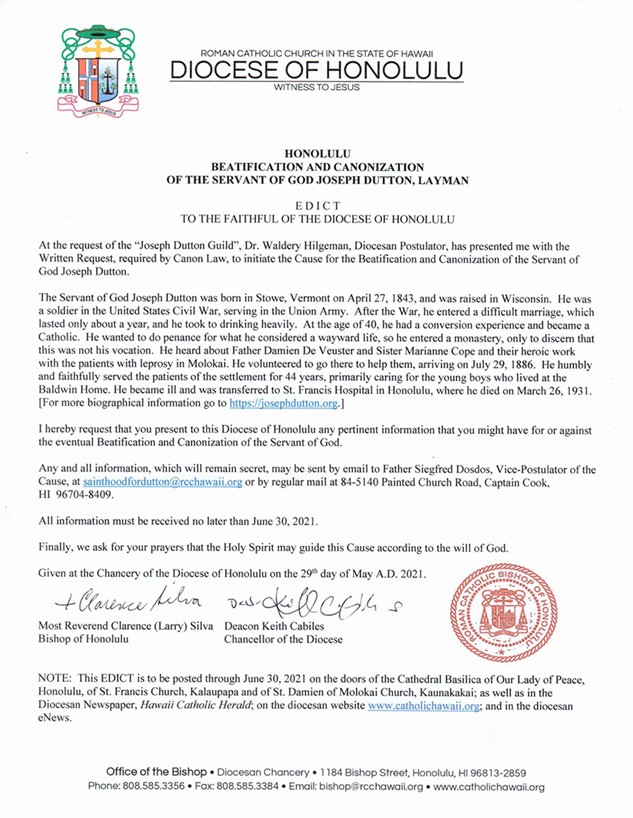 BEATIFICATION AND CANONIZATION OF THE SERVANT OF GOD JOSEPH DUTTON, LAYMAN

TO THE FAITHFUL OF THE DIOCESE OF HONOLULU

At the request of the “Joseph Dutton Guild,” Dr. Waldery Hilgeman, Diocesan Postulator, has presented me with the Written Request, required by Canon Law, to initiate the Cause for the Beatification and Canonization of the Servant of God Joseph Dutton.

The Servant of God Joseph Dutton was born in Stowe, Vermont on April 27, 1843, and was raised in Wisconsin. He was a soldier in the United States Civil War, serving in the Union Army. After the War, he entered a difficult marriage, which lasted only about a year, and he took to drinking heavily. At the age of 40, he had a conversion experience and became a Catholic. He wanted to do penance for what he considered a wayward life, so he entered a monastery, only to discern that this was not his vocation. He heard about Father Damien De Veuster and Sister Marianne Cope and their heroic work with the patients with leprosy in Molokai. He volunteered to go there to help them, arriving on July 29, 1886. He humbly and faithfully served the patients of the settlement for 44 years, primarily caring for the young boys who lived at the Baldwin Home. He became ill and was transferred to St. Francis Hospital in Honolulu, where he died on March 26, 1931. [For more biographical information go to https://josephdutton.org.]

I hereby request that you present to this Diocese of Honolulu any pertinent information that you might have for or against the eventual Beatification and Canonization of the Servant of God.

Any and all information, which will remain secret, may be sent by email to Father Siegfred Dosdos, Vice-Postulator of the Cause, at sainthoodfordutton@rcchawaii.org or by regular mail at 84-5140 Painted Church Road, Captain Cook, HI 96704-8409.

All information must be received no later than June 30, 2021.

Finally, we ask for your prayers that the Holy Spirit may guide this Cause according to the will of God.

NOTE: This EDICT is to be posted through June 30, 2021 on the doors of the Cathedral Basilica of Our Lady of Peace, Honolulu, of St. Francis Church, Kalaupapa, and of St. Damien of Molokai Church, Kaunakakai; as well as in the diocesan newspaper, Hawaii Catholic Herald; on the diocesan website www.catholichawaii.org; and in the diocesan eNews.

Click HERE to view the official PDF document of the Edict.