Two of St. Joseph School's teams qualified on the Regional Level to compete with 42 other schools in the 2019 First LEGO League Hawai'i State Championship Tournament on Saturday, December 7.  Both teams, the St. Joseph (Junior Team) and the Knights (Senior Team), successfully represented their Waipahu school in the State Championship.  The older group, “Knights” finished 5th in the robotics competition out of the best 42 teams in the state.  The younger group, Saint Joseph, also awesome, finished 21st in the robotics competition and received rave reviews as many commented that they have a bright future ahead of them.  Both teams won the prestigious LEGO Core Values trophy; the Junior Team won the trophy at the Regional Level and the Senior Team won it at the State Tournament.  Prestigious because the LEGO Core Values trophy's criteria affirms the students truly are living out St. Joseph School’s mission.  The trophy was presented by Governor David Ige and pictured below with coaches Dr. Yamashiro and Mrs. Yamashiro.  The teams and coaches worked after school, on weekends, and during summer with the fruits of their labor shown on Hawaii News Now's 10:00 PM broadcast.  As a team, they dedicated this very special season to the late Sister Judith Abique, SPC who was a wonderful supporter of their perseverance and commitment to work as a team and excel in their projects.  When the results were announced, smiles were on their faces and a little tear in their eyes as they knew she was with them for the entire journey.  They would like to thank parents, faculty, staff, and the administration for the love and support.  In return the school would like to express their gratitude to Dr. Yamashiro and Mrs. Yamashiro who both are truly a gift and blessing to the school community.  (Contributed by Dr. Yamashiro and Mrs. Yamashiro and Principal Beverly Sandobal) 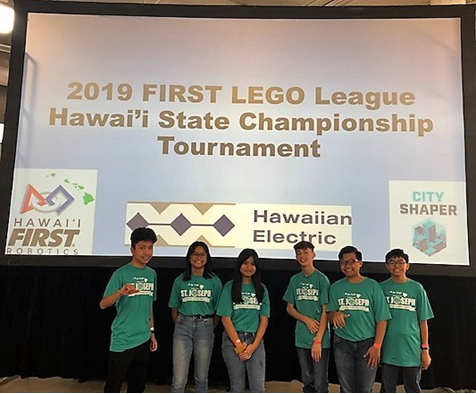 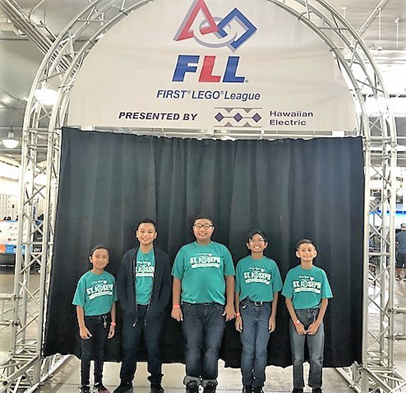 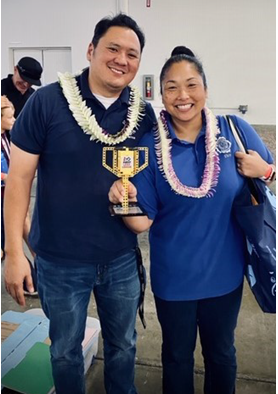