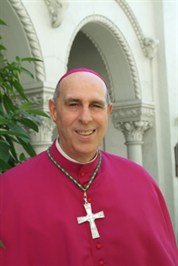 We thank God that on July 3, 2008, the Holy Father signed a decree confirming that the healing of Audrey Toguchi from cancer was indeed a miracle performed by God through the intercession of Father Damien. In effect, clearing the way for Father Damien to be canonized on October 11, 2009 and declared a saint to be venerated perpetually by the universal Church.

The Church canonizes saints to set an example for us, because we are all called to holiness. Our diocesan strategic plan, the Road Map for Our Mission, identifies addressing the issue of homelessness as one of its goals. Saint Damien addressed the very same issue in Kalaupapa. He himself built many homes for those who could not do so for themselves. We pray that Saint Damien will inspire us all to reach out to those who are most in need in our community to make a real difference in their lives, to serve them with the love of Christ.

It is God who created the miracle of Saint Damien. It is God who accomplished the healing, through his intercession, that allowed his cause for sainthood to move forward. It is God who will renew us all with his love as we thank him for this great honor paid to our brother and friend, our beloved Saint Damien. 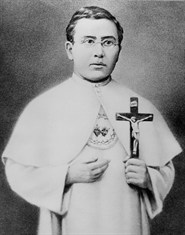 Damien, brother on the journey, happy and generous missionary, who loved the Gospel more than your own life, who for love of Jesus left your family, your homeland, your security and your dreams.

Teach us to give our lives with joy like yours, to be in solidarity with the outcasts of our world, to celebrate and contemplate the Eucharist as the source of our own commitment.

Help us to love to the very end and, in the strength of the Spirit, to persevere in compassion for the poor and forgotten so that we might be good disciples of Jesus and Mary.

Joseph de Veuster, the future Father Damien, was born at Tremelo in Belgium, January 3, 1840. When his oldest brother Pamphile entered the Congregation of the Sacred Hearts of Jesus and Mary, his father planned that Joseph would take charge of the family business. Joseph, however, decided to become a religious himself. In 1859 he entered the novitiate in Louvain and took the name of Damien.

In 1863, his brother, who was supposed to leave for the mission in the Hawaiian Islands, became ill. Damien obtained permission from the Superior General to take his place. He arrived in Honolulu on March 19, 1864, and was ordained to the priesthood on May 21, 1864. He was assigned to the island of Hawaii to begin his pastoral ministry.

At that time, the Hawaiian Government decided on a measure at stopping the spread of "leprosy" by deporting those thought to be infected to a peninsula surrounded by the ocean on three sides and by a very high mountain cliff on the other, a place of exile known as Kalaupapa on the island of Molokai. A plea was made by those abandoned for a priest or minister to come to the aid of their spiritual needs. Bishop Louis Maigret, SS.CC., spoke to the priests about the problem. Several volunteered to go for a few months. Damien was the first to leave on May 10, 1873. At his own request and that of the residents of Kalaupapa who were afflicted with leprosy, he remained definitively on Molokai. 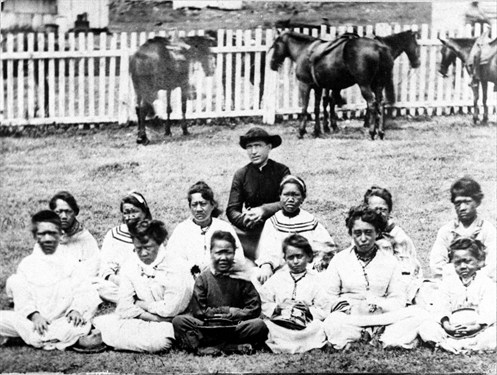 He brought hope to this hell of despair. He became a source of consolation and encouragement for his flock by becoming the doctor of their souls and of their bodies without distinction of race or religion. He gave a voice to the voiceless and built a community where they discovered new reasons for living. That once lawless place had now become a place where the law of love prevailed.

After he himself contracted the disease in 1885, Damien was able to identify completely with them with the words, "We, Lepers." Father Damien became a witness of the love of God for His people. His strength came from the Eucharist as he himself wrote: "It is at the foot of the altar that we find the strength we need in our isolation..." It is there that he found for himself and for those he served the support and encouragement, the consolation and the hope that made him "the happiest missionary in the world," a servant of God and a servant of humanity.

Father Damien died on April 15, 1889, having served sixteen years among the patients with leprosy. His mortal remains were transferred to Belgium in 1936, where he was interred in the crypt of Saint Anthony's Chapel, the Church of the Congregation of the Sacred Hearts of Jesus and Mary at Louvain. His fame spread to the entire world. In 1938 the process for his beatification was introduced at Malines (Belgium). Pope Paul VI signed the Decree on the "heroics of his virtues" on July 7, 1977.

In Father Damien, the Church proposes an example to all those who find sense for their life in the Gospel and who wish to bring the Good News to the poor of our time. In 1995, Father Damien was beatified by Pope John Paul II in Brussels. On October 11, 2009 Pope Benedict XVI raised Father Damien to the rank of "sainthood." Saint Damien's Feast Day is May 10.

The above text has been translated into the following languages: 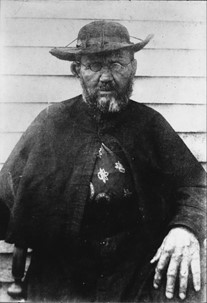 For more information and resources, visit: